Employment and Advancement- Here’s the Rubinoff Method. During the Depression of the 1930’s Rubinoff was making a fortune.  “So what?” you ask. He was a violin player. I was fortunate to work with him for some 20 years as his personal arranger and accompanist. Below is a youtube connection of one of his last concerts. Its at Scott’s Oquaga Lake House in Deposit, New York. I’m at the piano. I was the piano player at Scotts for the season. His full stage name was Rubinoff and His Violin. His legal name was David Rubinoff. Rubinoff is featured in one of  a series of books entitled What Ever Became Of? I do not remember which book the article is in. In the article, he reputed to have made $500,000.00/year during the ’30’s by playing the violin and by other musical activites.

He received his biggest break not from an agent, but from Rudy Valllee. So who was Rudy Vallee? Rudy Vallée (July 28, 1901 – July 3, 1986) was an American singer, actor, bandleader, and entertainer.

He was one of the first modern pop stars of the teen idol type. In the words of a magazine writer in 1929, “At the microphone he is truly a romantic figure. Faultlessly attired in evening dress, he pours softly into the radio’s delicate ear a stream of mellifluous melody. He appears to be coaxing, pleading and at the same time adoring the invisible one to whom his song is attuned.”[1] 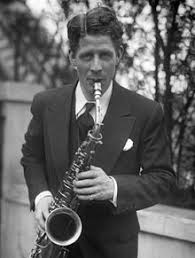 In his memoirs Rubinoff states that Rudy Vallee often came to hear him play at the Paramount Theater. He greatly admired Rubinoff’s musicianship as a conductor and violinist. At one time Rudy had to turn a job down for the American Broadcasting Company (ABC). He asked Rubinoff if he would like to be on the Chase and Sandborn Hour. Rudy had other contracts to fulfill. Rubinoff stated: ” Rudy Vallee introduced me to thousands of listeners who would never have heard of Rubinoff and His Violin. My fame grew thanks to Rudy.” Go to the front page of DSOworks.com. There is a real Find. Rubinoff and I give a concert. They thumbnail is entitled, Lost Concert is Found. Rubinoff plays at age 86. With this 45 minute concert he thrilled the audience at Scott’s Oquaga Lake House. For business, Rubinoff stressed honesty in expression, immaculate appearance, and hard work. Individuals who loved his playing advanced him over agents. Even Frank Phillips of Phillips petroleum let Rubinoff choose any three paintings he wanted from his New York art museum!