Nietzsche Loved Carmen by Bizet Over Wagner. Alfred Einstein, in his Music in the Romantic Era, gives  the following quote by Nietzsche about Bizet’s Carmen: “It is rich. It is precise. It builds, organizes, gets finished: therein it establishes a contrast to the excrescence in music, the “infinite melody.” Nietzsche stated that Bizet was in fact refreshing and  southern music, that allows a person to take leave of the damp North (referring to Wagner’ s music). He further declared that Bizet, who he loved, was the antithesis of Wagner. Whereas Bizet in Carmen used a closed form, Wagner went on and on with his motifs, seemingly forever. I personally find this amusing because so many have bound Nietzsche’s philosophy with Wagner’s music which often presents musical motifs on a seemingly endless scale. . 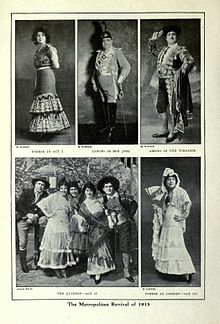 Publicity shots for the Carmen revival at the Metropolitan Opera, New York, in January 1915, with Enrico Caruso and Geraldine Farrar. Caruso is centre in the upper row, Farrar top left and bottom right.

MY INDIRECT CONNECTION WITH CARUSO THROUGH RUBINOFF

I had the honor of arranging and accompanying”David Rubinoff and His Violin”.  He told me the following story involving the great tenor, Caruso (picture above) and Mme. Schumann-Heink, “the greatest contra-alto singer”, possibly of all time: Victor Herbert brought Rubinoff and his family to America in 1911. Herbert heard Rubinoff playing a recital at the Warsaw Conservatory, then  under the leadership of Paderewski. He said to Rubinoff, who was 13 years of age at the time, “son, you belong to America.” Rubinoff told me the story of how Victor Herbert, then conductor of the Pittsburgh Symphony, had Sunday soirees at his residence in Pittsburgh.  Caruso and Mme. Schumann-Heink were among the famous regular guests. They would sing opera duets while Herbert played the cello and Rubinoff played the violin. They would often sing and play selections from Carmen. Herbert, by the way, loved to both compose and orchestrate his own music while standing up byusing a tall dresser that he used for writing.

In conclusion, I believe that George Bizet knew that he had a super hit on his hands with Carmen. Even the great Johannes Brahms told his publisher, Simrock in June of 1882, to please send him the score to Carmen. He declared he loved it more than any other of the works in Simrock’s catalogue, including, wrote Brahms, his own. Unfortunately, as happens with so many composers, Bizet never lived to see its  ultimate triumph. He died of illness three months after its opening at age 36.  May I suggest getting a recording of the great piano virtuoso, V. Horowitz playing it. He made an amazing arrangement of hit songs from the score.