Secret Ancient Codes Known in Egypt. The secrets involved number squares. A favored was the “three by three magic square.” Why was it called magic? Because hidden codes can appear from seemingly nowhere. You just have to look past the bars. Most people are stopped by the lines. They think that nine has its own little box. Or, that seven is likewise an isolated number etc. People who believe this cannot see the truth. To the uninitiated, this is to what God says to Isaiah in 42:16. Making “crooked things straight”, means getting rid of the bars. In this manner, secret ancient codes are revealed. 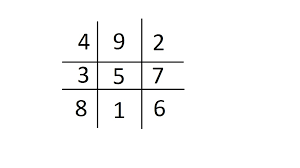 Magic  squares, in this sense, can be likened to stage or street magic. Priests, prophets, engineers and builders used the magic square in a practical manner. The 3 x 3 number square is not  paranormal or ritual magic.  This square, however, can entertain and engage. Just like the entertainer in this picture. In this sense, real technical magic is one of the oldest performing arts in the world.  Use of magic squares are documented in Neolithic times. I believe they were used before the Great Deluge in Noah’s time. I have blogged about their use in Lepenski Vir, Jericho, and Troy. Check out posts on DSOworks.com. These ancient sites were measured by characteristic numbers of number squares.

Audiences are entertained by staged tricks or illusions.  These are only seemingly  impossible or supernatural feats using natural means.[1][2]

A stage magician using a top hat as a prop.

However, religious priests of various cultures took the magic square’s properties to heart. Here are a couple of examples of how it was used.

I copied  part of my 353rd blog for this post: Three hundred fifty third blog and Hermes. This is a special blog. In antiquity a letter and numbers shared a symbol. This was true in Greek, Hebrew, Arabic, etc. In most modern languages, a letter has one type of symbol. The number has another. This ancient approach to communication was called by a Greek name- gematria. Three hundred fifty third blog, therefore is about Mercury-Hermes. The spelling by Greek letters of Hermes equated with 353.  Hermes (/ˈhɜːrmiːz/; Greek: Ἑρμῆς) is an Olympian god in Greek religion and mythology, the son of Zeus and the Pleiad Maia, and the second youngest of the Olympian gods (Dionysus being the youngest). Hermes was the emissary and messenger of the gods. The Romans called Hermes by the name, Mercury.

In other words, Hermes is found in the concealed span or diameter of a hidden code in the simplest of number squares. That is his domain.