Music and math share the rule of 9’s.  I find this very appropriate because music and numbers also share in usage of the same side of the brain. Words, on the other hand, use other side of the brain.  I will first demonstrate the rule of 9’s by music. Then I will demonstrate it with numbers. Inversion means to reverse the order, be it  of numbers or the two tones of a musical interval sounding  at the same time.  A unison inverts to an octave as 1 + 8 = 9. The second inverts to the seventh as 2 + 7 = 9. The third inverts to a sixth as  3 + 6 = 9. The fourth inverts to a fifth as 4 + 5 = 9. Change in the quality ( major to minor intervals or diminished to augmented)) will be the subject of a future blog

HOW ADDITION — USES THE RULE OF 9’S

Now let’s look at inverted numbers.  If someone is adding an entire column of numbers in a ledger, once in a while the digits in any one number might be mistakenly reversed.  For example, instead of writing 189, you write 198; or instead of writing 235, you write 532. This act is comparable to inverting or reversing musical tones. If what you expected the total to be, as opposed to what it is, differs by a multiple of nine, then you inverted or reversed the digits of the numbers in the manner that I have just demonstrated. Here is the proof: 198-189 = 9. With the second example, 532 – 235 = 297 When you divide 297 by 9, the quotient is 33. Let’s take a larger number: When you record 23,572 as 32,572 the difference is 9,000. That is also a multiple of nine.

In conclusion, since math and music are virtually twins, to study one without the other is like separating these twins, How sad! The study of mathematics must be complemented by the study of music.

Every child in school should be given the opportunity to learn music through piano lessons or musical programs at school.

The point I made above is amply demonstrated by Albert Einstein; a great mathematician who  played the violin. The fictional detective genius sleuth, Sherlock Holmes, also played the violin.  Arthur Conan Doyle realized the importance of music and how it is a part of superior intellect. One more word on the rule by 9’s. In the highest court of our land, the Supreme Court, we also have a rule by nine. The founding fathers of America were also brilliant. 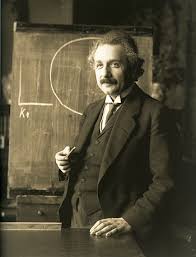 Albert Einstein is the prototype of the musical mathematician. He played the violin. In his writings he discusses how one the the best moments of his life was one he received a good review by a music critic for playing .