Another Ancient Dodecahedron in Summeria. Check the last blog. This same model applied to ancient Israel. The blog explains the parallel. This same figure explains our current musical circle of fifths. The dodecahedron is quite inclusive. Ancients ascribed the overall shape of the Universe to this figure. Click on my internal link below: Translating Geometry to Words and Numbers.  This link contains another internal link. Both also define the dodecahedron in antiquity.

Visiting Summeria For Another Ancient Dodecahedron

Look at how varied the dates of its various uses are. The 12 primary key signatures of the circle of fifths became prevalent in the 18th century. It is still widely used. The dodecahedron’s parallel to the 12 tribes of Israel was officially established in Israel about 1,000 B.C. The 12 Summerian gods came about 4,000 B.C.

Ancient civilizations associated the simplest number square (3 X 3)  with Saturn. This number square has hidden codes not seen by most. That is my reference in the featured picture. It can be look at by 3 numbers at the time or by hundreds. It literally is the stamping mill of the Universe. Many blogs on this website are about this number square. Read my internal link below. Why all this fuss? Understanding this lost knowledge and its redeployment can initiate a new Golden Age. Such an age is marked by peace and plenty.

The Stamping Mill of the Universe – DSO Works

Translating Geometry to Words and Numbers. My advance scout for a number of my blogs about antiquity has been the Reverend John Michell. I was introduced to his writings in 1970.  It was The View Over Atlantis. The key is a subject that few have even heard of: “Gematria.” Hear is Wikipedia’s take on the subject. It offers some background for this blog.

Gematria /ɡəˈmeɪtriə/ (Hebrew: גמטריא‬ גימטריא‬, plural גמטראות‬ or גמטריאות‬, gematriot)[1] originated as an Assyro-Babylonian-Greek system of alphanumeric code or cipher.  Later adopted into Jewish culture.  It assigns numerical value to a word.  Names or phrases with identical numerical values  bear some relation to the number. This may apply to Nature, a person’s age, or even the calendar year.

Similar systems, many inspired by Hebrew gematria, have been used in other languages.  These include i.e. Greek isopsephy and Arabic abjad numerals.

An example of Hebrew gematria is the word chai  (life). It has two letters. They add up to 18. This has made 18 a “lucky number” among the Jewish people. Gifts of money in multiples of 18 are traditional for this reason.[2]

Translating Geometry of the Dodecahedron

In Hebrew gematria the noun for “Israel” translates to 541. A regular pentagon has 5 vertexes of 108° each vertex. That totals 540°. The additional “1” in Israel  (541) יִשְׂרָאֵל represents the the core of Israel-  One God. Here is the process:

Keep in mind: At one time many nations had 12 tribe cultures. Jewish tradition has kept it alive. Again, I refer to the Reverend John Michell. This time the book is the 12 Tribe Nations. Link is below. My contribution is illustrating Israel’s parallel to the dodecahedron. Also, below is my internal link of how our musical system relates to this same dodecahedron.

Twelve–Tribe Nations explores the symbolism and use of the number twelve in organizing ancient societies, connecting this sacred number with the twelve …

New Musical Theory Model Based on the Dodecahedron. We know about the circle of fifths. A quick review: In music theory, the circle of fifths (or circle of fourths) is the relationship among the 12 tones of the chromatic scale.  It shows their corresponding key signatures.  Also found arethe associated major and minor keys. Musical tones use 7 letters of the alphabet. They are A-B-C-D-E-F-G. These letters repeat over and over to encompass the full key signature span.

Mesolithic Times Had a Unique Standard

Click on the above internal link. It offers background on the 5 Platonic solids. The Platonic Solid we are concerned with here is the dodecahedron. In antiquity it symbolized the overall shape of the Universe. By this rational,we live in a musical Universe. As for the featured picture, note: The major keys are written in the center of each pentagon. Start in consecutive order (from C major) from its lower left point. The tone on the lower right completes the 5 tones. In the case of “C” major, it is the tone “G”. This lower right begins the next pentagon. It is completed at “D” … 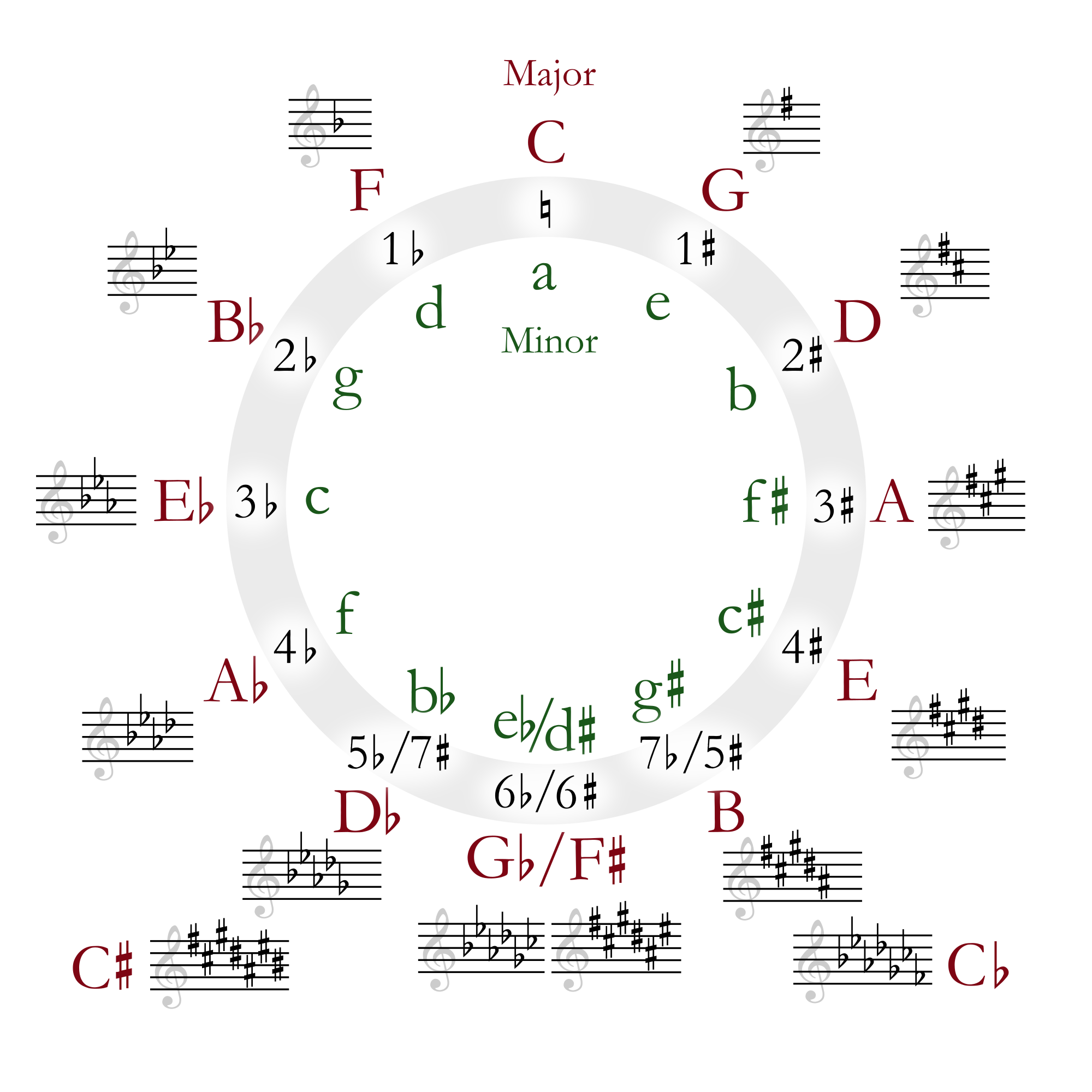 Our Musical Circle of Fifths and Plato- Is this connection crazy? After all, Plato was born about 428 BC. Our Circle of Fifths, which most of our present day music is based on, came into being in France and Germany in the later 1700’s and then spread to England in the 1800’s. Plato wrote extensively about the five regular polyhedrons; the dodecahedron, pictured above, being the most complex of the five. He speculated on their nature in Timaeus c.360BC.

PLACING THE 12 KEY SIGNATURES ON THE DODECAHEDRON

Here is the parallel:

This sequence keeps on going through all 12 key signatures of our circle of fifths. In the picture above, C#,Gb, and Cb are called enharmonic and are attached as doubles called by different letter names  written out  at the bottom of the illustration:  C# and Db major are played on the same piano keys; as are F# and Gb major; and B and Cb major.  Thought they are 15 by name, they are 12 by actual number.

WHY MUSIC IS  PARADISE IN SOUND

So where is Plato in all of this? The geometry of the dodecahredon parallels our circle of fifths as follows: If the defining 5 tones of the key are each set in the vertex of a pentagon, then the 12 scales perfectly outline the figure of the dodecahedron. As the Platonic solids considered perfect and totally symmetrical, and symbolized the totality of the universe; then we can say the same of our Circle of Fifths . It too is perfect, totally balanced and places us in this state of mind when we listen to it. Our Musical Circle of Fifths and Plato- translates to a new definition of music: Music is paradise in sound. The art offers no less.