Three Square Code Structures Stonehenge. Life often offers us the polarity of opposites. Something stands in opposition to something else.

This tiny number square gives rise to the pillar arrangement at Stonehenge. It was used in countless ways by ancient historic and even prehistoric civilizations. Currently we are entering a new age. It will be marked by peace and plenty. This is also known as a Golden Age. The same arrangement that formed the Palestinian cubit and the Egyptian cubit also structured the pillar arrangement at Stonehenge. Some information I quote from my own internal link below:

Abu Mūsā Jābir ibn Hayyān explains how this number square was divided into various corners and gnomons. I show how the dotted points below were the options that were used for the appropriate Egyptian and Palestinian cubits. It was also used for builiding Stonehenge.

First we must see who gave rise to realizing this division of the square three code in the particular manner that I will present. Abu Mūsā Jābir ibn Hayyān (Arabic: جابر بن حیان‎‎, Persian: جابر بن حیان‎‎‎, often given the nisbahs al-Bariqi, al-Azdi, al-Kufi, al-Tusi or al-Sufi; fl. c. 721 – c. 815),[6] also known by the Latinization Geber, was a polymath: a chemist and alchemist, astronomer and astrologer, engineer, geographer, philosopher, physicist, and pharmacist and physician. Born and educated in Tus, he later traveled to Kufa. He has been described as the father of early chemistry.[7][8][9]

Numbers in a row are called a sequence. Sequence is also used in music and dance. Stonehenge uses 5,6,7, and 8: 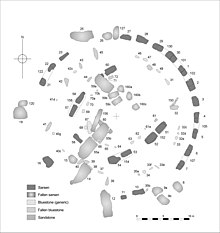 Plan of the central stone structure.  The stones were dressed and fashioned with mortise and tenon joints before 30 were erected as a 108-foot (33 m) diameter circle of standing stones, with a ring of 30 lintel stones resting on top.

Here’s the big question: Does Stonehenge represent the cosmic stellar process of creation? Was this known in the distant past? Or, is this just another numerical co-incidence?

Tie Twelves Together in Several Combinations. I know, there are only 8 eggs in the frying pan. However, eggs are still sold by the dozen. I am delving into Neolithic thought. They venerated the “dozen.” They knew it was of a former age that knew ” plenty and peace.” Here are a few thoughts from Wikipedia:

A dozen (commonly abbreviated doz or dz) is a grouping of twelve.

The dozen may be one of the earliest primitive groupings, perhaps because there are approximately a dozen cycles of the moon or months in a cycle of the sun or year. Twelve is convenient because it has the most divisors of any number under 18.

The use of twelve as a base number, known as the duodecimal system (also as dozenal), originated in Mesopotamia (see also sexagesimal). This could come from counting on one’s fingers by counting each finger bone with one’s thumb.[citation needed] Using this method, one hand can count to twelve, and two hands can count to 144. Twelve dozen (122 = 144) are known as a gross; and twelve gross (123 = 1,728, the duodecimal 1,000) are called a great gross, a term most often used when shipping or buying items in bulk. A great hundred, also known as a small gross, is 120 or ten dozen.

At one time there was a Golden Age. It was held together by a “grain of mustard seed”. This refers to the smallest possible number square. It was called the 3 x 3 number square. Here is the traditional setting of numbers.

Note the following “dozen” properties of this number square:

Finally: Here is the “great hundred” also known as the small gross. The number is 120. From the square, we arrive at 120 in two differing ways.

Enjoy, live with, and work with this number square. It is the key to another Golden Age. DSOworks.com will keep the blogs coming.