Ten Minute Musical Bliss of Rubinoff and His Violin https://www.youtube.com/watch?v=QUz-LOrzTQU. Like fine wine, musicians and artists improve with age. Dave Rubinoff is much too ignored today. That is due to the jealousy of the 100% pure classical musicians. Indeed, I even wonder how many pure symphonic musicians are left to be found today. It seems like so many are crossing the lines into the popular field.

Even as of recently, Dave Rubinoff refuses to give up the ghost. This is true even some 35 years after he passed away. Maestro, conductor, and curator Joseph Rubin (not related to Rubinoff except in spirit) gave a concert commemorating this great artist last summer. I was called to appear with violinist extraordinaire, Steven Greenman. It was  held at the  Circleville High School near Colombus, Ohio. Maestro Greenman had just returned from a tour of Poland. Among other places, he played the most haunting melodies in the synagogue in Cracow. Below was the itinerary Maestro Rubin sent me for the Circleville. Ohio concert.

Hollywood Nineteen Thirties under Rubinoff’s Baton. I frequently blog about David Rubinoff and His Violin. That’s because I worked with him for over 15 years. My capacity was as his arranger and piano accompanist. The years spanned 1971 to 1986. In 1986 Dave passed away at age 89. He was the very model of musical success. This was especially true in Hollywood during the nineteen thirties. I’ll never forget the spontaneity of his reply when I said to him: “Mr Rubinoff, music has been good to you.” He immediately replied as a matter of factly, “Why, that’s because I’ve been good to music.”

You can now listen to a recent concert that I was honored to perform at with maestro Steven Greenman. Steve performs the Fiddler just as Rubinoff intended it. The Ted Lewis Big Band museum curator and conductor extraordinaire, Joseph Rubin, invited me in from Sarasota to play the concert honoring my friend and mentor, David Rubinoff. 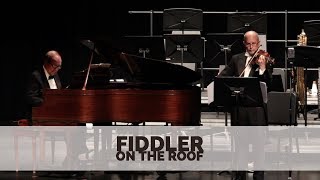 Dave’s wife, Darlene Rubinoff, wrote a book about his life. Dave personally dictated it to her as she tape recorded his voice. Eloquence, sophistication, technical prowess,  passion and perfection marked his playing. But most of all he openly conveyed the love he had for his  audience. In return his audiences loved loved him. This was to the tune of hundreds of thousands annually in the 1930’s.  In this regard I must quote Mr. Rubinoff’s words through his angel of a wife, Darlene Azar Rubinoff:

“I worked every  hour of the day and night, driving everyone with no conception of time, being only interested in my music and pleasing the public. My audiences screamed and applauded. They were after me night and day, waiting for me outside the stage door for a glimpse or for an autograph. I seldom refused them. They were the reason for my success. That is why I drove the orchestra and the arrangers so hard. I screamed, I cajoled. I even, on occasion, threw things in order to win my way. The amazing thing was, I was always right when it came to my music.”

Please enjoy the internal link below of the concert I gave with Rubinoff in the Catskills at Scott’s Oquaga Lake House.  The youtube link is at the end of the blog. It was over 30 years ago. Also, my wife Sharon and I have written a new opera entitled “Patra”.  The featured artwork is used by permission from the  “From Cairo With Love”  art gallery in Cairo, Egypt. It will be premiered in New York on Schroon Lake this coming September. Please read about the details under the “stage”on our front page of DSOworks.com.

Glamorous Past Found in Glamorous Music of Rubinoff.  Rubinoff  was one of my primary mentors. Under him I learned the art of arranging.  Arranging “involves adding compositional techniques. This includes new thematic material for introductions, transitions, or modulations, and endings. . . . Arranging is the art of giving an existing melody musical variety”.[2] Rubinoff always had access to the finest arrangers.  He conducted the orchestras at the New York and Brooklyn Paramount Theaters. He also conducted for Paramount Pictures in Hollywood. This was in the late 1920’s and early  1930’s. In the featured picture he is billed with Rudy Vallee at the Brooklyn Paramount. Rubinoff is on the right pillar. Rudy Vallee, on the left. Gary Cooper and Marlene Dietrich are centered between on the movie poster. Rubinoff chummed with all the stars. Yet surprisingly so few today have heard of him.

Rubinoff’s Fiddler on the Roof – Violin and Piano

I was called by Maestro Joseph Rubin. The purpose was to perform at his Rubinoff and His Violin concert. It was  sponsored by the Ted Lewis Museum. Can you imagine?  More than 30 years after passing away, Dave Rubinoff is still doing favors for me? He was the grandfather I never got to know. Both the orchestral conductor and museum curator is Joseph Rubin.  Master folk violinist, Steven Greenman, is the soloist.  They are both pictured below with the orchestra. Above on youtube Steve and I are playing the arrangement I made with  Rubinoff.  It was our violin/piano arrangement of the Fiddler on the Roof.  Date of creation was the mid 1970’s.  Now, for the 1st time, you can listen to it on the youtube link posted above. The concert was videoed live at the Circleville High School in Circleville Ohio.    If you would like to help the cause help of good music, please feel free to share this post with friends!

Also, see my internal link below. It has a concert on youtube  I gave it with Rubinoff in New York’s Catskill Mountains.  He was 86 years of age at the time. You will learn facts about American musical history never before recorded. It also illuminates our glamorous past.  He liked to speak to the audience at his concerts. His best friend, Will Rogers,  taught him how to “break the 4th wall”. To my knowledge this is a most “rare concert recording”. Possibly it is the only record is existence of a full Rubinoff concert. `

Rubinoff and His Violin Sort of Was My Grandfather – DSO Works

Monstrous Pianos Replace Early Keyboard Instruments. The title of this blog poses a basic questions: How does a pianist interpret the music of composers who lived before 1850?  Or, expressed another way: How do we stay true to the intentions of composers who lived in this time period? In part this will be answered by the desciption of a concert I gave as pianist for a world renowned violinist. First, how does a harpsichord produce sound? A harpsichord is a musical instrument played by means of a keyboard which activates a row of levers that in turn trigger a mechanism that plucks one or more strings with a small plectrum. The harpsichord can produce a specific louder sound. This happens when a coupler joins each key to both manuals of a two-manual harpsichord.  However, it offers no dynamic or accent-based expressive control over each note.

How does a modern piano produce its sound? By strings being struck by the action of hammers.  Loudness of every tone can controlled by the fingers hitting the keys that activate the hammers. The more force you employ, the louder the sound. The tones produced can be blended and amplified by a foot pedal. However, here is the primary pitfall: Unless the pianist is incredibly precise in hitting  notes exactly together, the piano pedal merely amplifies his imprecision. 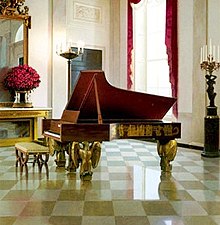 I worked for 15 years with a violinist whose accompanists used the pictured piano above. My capacity was as his arranger and accompanist.  His stage name was Rubinoff and His Violin. He played for 5 American Presidents. I’ve played for only two up to this point. I just commemorated his memory in a concert at Circleville, Ohio this last June 2, 2018.  In the 1930’s Dave made as much as $500,000.00 annually as violinist and conductor.  For my own last concert, Maestro Steve Greenman was the featured violinist. Joseph Rubin is the curator of the Ted Lewis Museum.  He also  conducted the orchestra. As  mentioned in the poster, I also gave a featured lecture about our working relationship.  More concerts with Maestro Greenman are in the making. Announcements will be forthcoming.

No Monstrous Pianos for Rubinoff and His Violin

I brought the concert into the blog because Rubinoff was very specific about the touch he wanted. Rests had to be observed. His notated rests were not to be covered by a piano pedal. Often, he required a slightly detached and lighter  touch, like a harpsichord. However, at times the piano had to roar- like the monstrous pianos. Hear our most rare and lost concert below. Rubinoff and I gave it in the Catskill Mountains of New York State in 1984. He was 86 years of age, As he talks to the audience, you’ll become acquainted with a great man.  Also, please read the related Rubinoff blogs on DSOworks.com. You’ll see how Will Rogers helped to shape his incredible career. Dave loved the American Indians. I believe that in  turn Will,  who identified with the Cherokee Nation, helped him.

Lost Concert “Rubinoff and His Violin” on Oquaga Lake, 1984 – YouTube

Commemoration Concert for David Rubinoff and His Violin. Musical history is about to be made. I, David, worked with Rubinoff and His Violin for decades. He passed away in 1986. Dave felt that our arrangement of the Fiddler on the Roof was the best arrangement made in his entire life. It was  a “100-proof” standing ovation elixir.  On Saturday, June 2, a great virtuoso violinist will and I will perform a special dedication to David Rubinoff.  He and I will perform the Rubinoff Fiddler on the Roof. Rubinoff was regular conductor and soloist at the Paramount in New York City. Rudy Vallee saw him.  As a result, he signed a contract with the Cantor show. During his career, Mr. Rubinoff performed at the White House for Presidents Hoover, Roosevelt, Eisenhower and Kennedy. During the Great Depression years, Mr Rubinoff made as much as $500,000.00 annually conducting and playing the violin. The American public needed music that heals. David gave them what they needed.

Here is what is particularly fun for me: Rubinoff and I worked an entire summer season on our own specical arrangement of the Fiddler on the Roof.  Now, over 30 years later it will get a new life! Maestro Greenman once played a another arrangement of the work. He was violin soloist with the Energy Corridor Houston Orchestra (ECHO). This was on Friday October 21st, 2016. Steven collaborated collaborating with his good friend, the conductor/violinist Michael Fahey.  For the ECHO performance he played”Theme from Schindler’s List” and “Fiddler on the Roof”, arranged by John Williams. With great anticipation, I am looking forward to seeing which arrangement the Maestro and our concert audience prefers. Also, I will give a  special presentation about my association with Dave. The distingusihed orchestral conductor will be maestro Joseph Rubin. He is also the curator of the Ted Lewis Museum in Circleville Ohio.

Tickets will be available in March. The internal links below give more information and samples  Rubinoff and His Violin. This once in a lifetime concert should not be missed!   It will be held at  Circleville High School  in the auditorium. See you at our commemoration concert. – David.

Forgiving Audience for Rubinoff and His Violin – DSO Works

Riches Come from “Dance of the Russian Peasant”