Actually, in the entire Universe, the 3 x 3 number square is the ultimate synergetic model: If you look at its parts, you will never know the entirety. The entirety encompasses infinity. In seemingly magical synergetics; it synergizes all. “Where is the interaction of its parts”, you are probably asking?

Many blogs on DSOworks.com define and reveal different aspects this most precious gem of mankind. I strongly believe Atlantis existed. They strayed from the way. Plato wrote about the subject. The seemingly magical synergetics of this number square can remake our existence harmonious with one another once more.

Mesolithic Times Had a Unique Standard. Where did I come this knowledge that few know about? I was the piano player at Scotts Oquaga Lake House. An Indian spirit guide that dwells around the lake instructed me in the ways of antiquity.  I’m quite sure that those  who read this blog will not be familiar with most of what they will read. The Mesolithic era began about 8000 bce, after the end of the Pleistocene Epoch (i.e., about 2,600,000 to 11,700 years ago), and lasted until about 2700 bce. At that time (2700 bce) it has been postulated that the Great Pyramid and Stonehenge may have been constructed. These structures code the knowledge of earlier times that this blog and other blogs on DSOworks.com will illustrate. 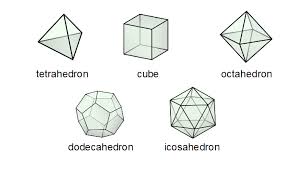 The five regular polyhedrons (Platonic Solids) are a geometrical construct of the 3 x 3 number square. Mesolithic cultures had knowledge of this. Our civilization today mostly does not.

The 3 x 3 number square holds numbers one to nine. Any straight row of three totals 15. However, it also contains a plethora of hidden number codes. If you wish to understand a few, click on-Mysteries of Music Unearthed By Tick-Tack-Toe.  I’ve blogged about its use at Teotihuacan.  Many of my blogs are about its hidden number codes. This square was the cornerstone of not only Mesolithic cultures; but even of civilizations before the great deluge described in the story of Noah.  Understanding its manner of operation  promises a path to  peace for today. Here is an excerpt for my still unpublished Staff of God, Volume 1, inspired by the Oquaga Spirit.  Its entire 424 pages are written in quatrains. The  quatrains below describe  but a small fraction of  how this number square relates to the Platonic Solids.

Numbers one to nine are arranged in a unique way
Above is the traditional arrangement of the 3 x 3 square.  It can be arranged in other ways.
As used by the 5 regular polyhedrons (pictured above)
Nine can also be found in several ways. Here are two:

Enjoy my free poetry reading as given to me by the Oquaga Spirit.

Lepenski Vir is Proof of the use and understanding of an Ancient Number Square.  A Mesolithic site on the Blue Danube used the codes of the square of three.  Lepenski Vir (Лепенски Вир, Lepen Whirl) is an important Mesolithic archaeological site located in Serbia in central Balkan peninsula The latest radiocarbon and AMS data suggests that the chronology of Lepenski Vir is compressed between 9500/7200-6000 BC.

I learned of these codes from  a spirit. I call on her by the name, Oquaga Spirit. She was of the Lennie Lenope tribe.  They dwelled around Oquaga Lake. I worked for years at Scott’s Oquaga Lake House at my profession- a piano player. Below is an excerpt from my book, The Staff of God Volume One, ref. pg. 306.

The entire foundation area  (not all in the picture) is framed by a roughly rectangular shape frame of 185 x 55 yards. Over 1000’s of years the same dimensions have been used for many construction projects.  Some examples:

These two interlocking circles are at the heart of sacred building. These circles form the vesica piscis (vessel of the fish). Lepenski Vir mainly demonstrates understanding of the 3 x 3 square’s hidden mathematics. Here is some samples of how to find the 555 code: Take two sets of three opposite numbers. Add them together. Then divide them by two for an average: Examples are 492 + 618 = 1110. Divided by two = 555. Another example, 834 + 276 = 1110, Divided by two = 555. Ths simple number square is also the most complex. The builders its ancient foundation in Yugoslavia totally understood this.