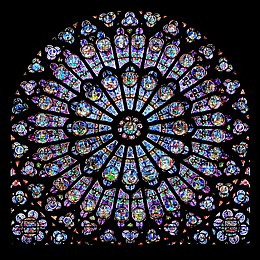 Rayonnant rose window in Notre Dame de Paris. In Gothic architecture, light was considered the most beautiful revelation of God, which was heralded in its design.

2. Employment is a relationship between two parties, usually based on a contract where work is paid for, where one party, which may be a corporation, for profit, not-for-profit organization, co-operative or other entity is the employer and the other is the employee.[1]

So Where is My Beautiful Employment?

Ragtime Enriches Yes, I Mean Money, lots of it! And yes, it’s time to be happy again. Listen to some Scott Joplin, Charles Lamb, Eubie Blake, Tom Turpin, James Jesse Europe or  Luckyeth Roberts. Their music is as entertaining as their names. Eubie Blake said in  gracious tribute, “Joplin was the father of us all.” Ragtime is a musical style that enjoyed its peak popularity between 1895 and 1918.[2] Its cardinal trait is its syncopated, or “ragged”, rhythm.[2] The style has its origins in African-American communities like St. Louis[3][4] years before being published as popular sheet music for piano.

Scott Joplin is unquestionably the father of ragtime.

What brought about the return of ragtime after 1918? The movie called The Sting. The film is noted for its anachronistic use of ragtime, particularly the melody “The Entertainer” by Scott Joplin, which was adapted (along with others by Joplin) for the movie by Marvin Hamlisch (and a top-ten chart single for Hamlisch when released as a single from the film’s soundtrack). The film’s success created a resurgence of interest in Joplin’s work.[4]

If Ragtime Enriches, What Did it Do for Me?

The Scott family was attracted by the Kissin’ Cuzzins marquee that announced me playing ragtime piano. They own Scott’s Oquaga Lake House in the Catskills.  Its been in the family since 1869. The current  year was 1983. For my audition I had to play the Pineapple Rag perfectly for the  The Scotts.  They were so impressed that they invited our entire family up to New York for that summer. That started a long string of about 20 summer seasons in the Catskills. We got to live our lives like as it was in the 1930’s setting of The Sting. It was like we took a time machine to the past.  All loved it! It give rise to my book of poetry, The Oquaga Spirit Speaks, available on the product page.